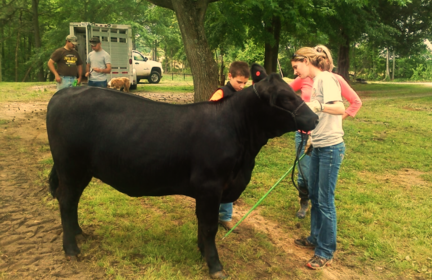 Here at HD Farm, we work hard and enjoy seeing it pay off.

In 2012, our oldest son Ty joined the Goochland Animal Science 4-H Club to further his knowledge of cattle.  He has certainly done that but what he didn't expect was to learn more about himself.  He has become a confident public speaker, a helpful friend and pretty tough little cowboy when it comes to working with these huge animals.  The 4-H has been a fantastic experience for the entire family as it becomes a full family affair with showing cattle.

Ty began his show career with a lovely yearling registered Angus heifer purchased from Silverado Cattle Company in Orlean, VA.  This picture is the day Silverado Holly Queen  was delivered to our farm. On April 25th, 2013, our lives changed for the better.

Holly needed training on how to go from a pasture puff to a legitimate show heifer.  While she came to us broke to lead on a halter, she needed training on how to walk properly with her head held high and proud.  Many, many hours are spent training Holly to stand properly with her feet together to accentuate her conformation. Every day, Ty rinsed, conditioned and blow dried Holly's shiny coat.  Once a week she would get a bath with soap. He fed her a special ration of show feed which included oils to keep her shiny and feed to keep her plump in all the right areas.
Holly was treated like a princess.  She had her very own bedded 12x16 stall in the barn with a fan to relax in during the heat of the summer days.  This kept her jet black coat from fading in the sun.  After the sun went down, Holly is led to her pasture until dawn when she returned to her stall.  It must be rough being waited on hand and foot!


Ty's first show of the year was at the Caroline County Fair. He came home with two fifth place ribbons.  We were incredibly proud of him for being brave and walking in the ring with a 1000lb animal to show.  After this show, Ty caught the "show bug".  Off we went traveling across the state for the rest of that summer.  Many miles and ribbons later, we settled in for autumn.


We had Holly bred in July to calve out in April 2014. We kept our eye on her throughout the fall and winter.  While she was due to bring a precious calf into the world on April 15, she surprised us by giving birth a full 5 weeks early to TWINS!  Twin heifers, that she accepted without hesitation and nursed 100% until weaning.
*The Pittman's were blessed in so many ways.*


Photo credits go to Ty.  He snapped this picture on Day 2 of their little lives.  It was the twin's first experience outside of the barn. They quickly found some speed in those legs and were soon running and jumping through the air.  Welcome to the HD herd, Sophie and Josie!

As the twins got older, it was time to turn them into legitimate show heifers as well.  At three month old, Ty and Mom decided it was time to dive into uncharted territory...breaking calves to lead.  It did not come without some blood and sweat but together, we made this happen.

Ty showed Holly and the twins for the entire 2014 show season.  Preparing three animals to enter the ring at the SAME time was a challenge, but we survived.  It was a fun show season with some great friends to spend it with.

Our 2015 show season looks to be shaping up nicely.  We have purchased some new yearling heifers from Whitestone Farm in Aldie,VA.  We bought them to bring some outstanding genetics into the herd.  They will make Ty very nice show prospects in the coming year.